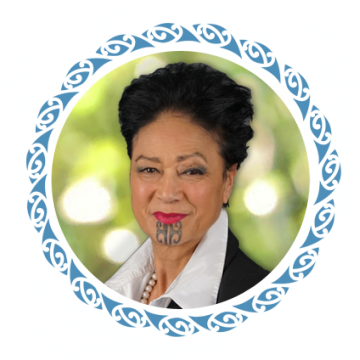 Donna Awatere Huata takes on the role of Māori Climate Commissioner after a lifetime spent as a fierce advocate for the Treaty of Waitangi and an equally fierce opponent of ongoing colonisation of and racism toward Māori.

Her early life began with a scholarship to the London School of Opera, but family circumstances forced a career change which saw her become the first registered Māori psychologist. In this role she witnessed government policies and procedures harmful to the wellbeing of Māori whānau but especially to their children.

These experiences fuelled her commitment to fighting contemporary colonialism – joining  Ngā Tamatoa as a founding member in 1971, taking part in the major events of the seventies, challenging ceremonies at Waitangi, the Land March, Bastion Point, Awhitu, Raglan, writing articles as a Māori feminist for the feminist magazine Broadsheet and publishing the first of her four books, Māori sovereignty, in 1984.

Donna’s activism on behalf of Māori Women was recognised in 1982 with the United Nations Mid Decade for Women Award.

In the early eighties, her company IHI Communications pioneered bicultural training in government agencies raising awareness of the Treaty of Waitangi, the impact of the colonisers savagery and the cultural concepts that underpin the Māori world seeking to encourage government policies and practices based on knowledge of and respect for Māori and the Māori world view.

Donna entered parliament in 1996 in the belief that was possible to shift damaging policies to Māori – in education, health, housing and justice. However – wrong belief (racism rife in parliament), wrong party (ACT), wrong timing (Helen Clark government shut down moves to “close the gaps”).

Donna then experienced first hand our criminal justice system and the stupidity of the prisonisation of the Māori population, and later with retired probation officer Tom Hemopo brought a claim, which was upheld, to the Waitangi Tribunal on racism in the Justice system.

Donna recently retired as Deputy Chair, Administration for the New Zealand Māori Council, as Secretary of the Tākitimu District Māori Council and as Secretary to the Māori Director Appointor Board for the Crown Forestry Rental Trust.

In 2014 Donna presented the Māori claim for water to the United Nations permanent forum for indigenous people on behalf of the NZ Māori council. She is an original claimant on the Mana Wahine claim led by Dame Mira Szaszy and is the lead claimant for the claim of Racism against the Crown to the Waitangi Tribunal.  Both claims are in the process of being heard.

Donna, her husband Wi and their family produce premium varietal Taiao Estate Wines, made from single vineyard grapes, for the export market in their rohe potae of Bridge Pa, Hawkes Bay.